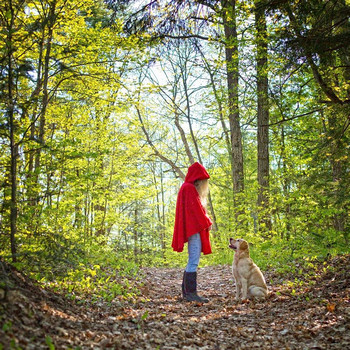 I'M A WORK IN PROGRESS

IT ALL STARTED WITH A DOG...

As a kid, I loved drawing, and spent hours doing it. Horses were my thing back then, and I loved the illustrations in the Billy & Blaze books by C.W. Anderson. I lived and breathed horses for a good decade, and everything paper that I owned was covered in horsey doodles.

Eventually, I ended up leaving horses behind, as well as my drawing activities : academics took the front seat, and I grew up, as little girls do. Somehow, this shy, studious introvert became a professor. I also began freelancing as a translator.

So, where does the dog come into all of this?

Well, I grew up with dogs; our family was never without one, and often we had two or three at once. Back in the early 1990s, we had a beautiful, sweet, special yellow Lab called Tanna. She got cancer and we lost her at just five years old. What truly broke my heart afterwards was the realization that I had just three - three! - photographs to remember her by.

When the next dog came along, I also acquired a camera, and thus began a new passion and calling. I discovered that not only did I love photography, I was good at it, and furthermore it scratched the subconscious art-making itch, because photography is in fact the most pure and perfect means of instantly making art. Compose and shoot and you're done! It melded perfectly with my busy young career.

Fast forward a couple of decades, and a couple of dogs later, and photography remains a daily passion and practice. My two current Labs, aged nearly 9 and nearly 5 at the time of this writing, have been photographed every single day I've had them, since they came home at eight weeks old. We've never missed a single day. In fact we even had a daily dog blog going for a couple of years.

My professional life has changed a lot in the intervening years as well. I walked away from my teaching career, and with the generous support of my husband, I chose the daunting but fulfilling path of self-employment. I moved to a tiny village far north of the city, and slowly but surely, my creative side began to awaken from its long dormancy.

Photography's very immediacy has always been a bit frustrating for me. The moment is captured and documented, and done. I realized that I was looking for something more subjective and holistic and immersive, and I came back full circle to drawing and painting. I've spent the last couple of years dedicating a part of each day to making art, and each day I realize how much I love and look forward to doing it. I am learning as I go along: each and every new piece teaches me something. I am indeed a work in progress, and to feel that way in my fortieth decade is wonderful!

I've finally accepted the mantle and the title of artist, but true to my tentative nature, I haven't jumped in with both feet. I still do my translation work as a 'real job', however I have decided to put my art out there and share it, because I can't keep saying one day...