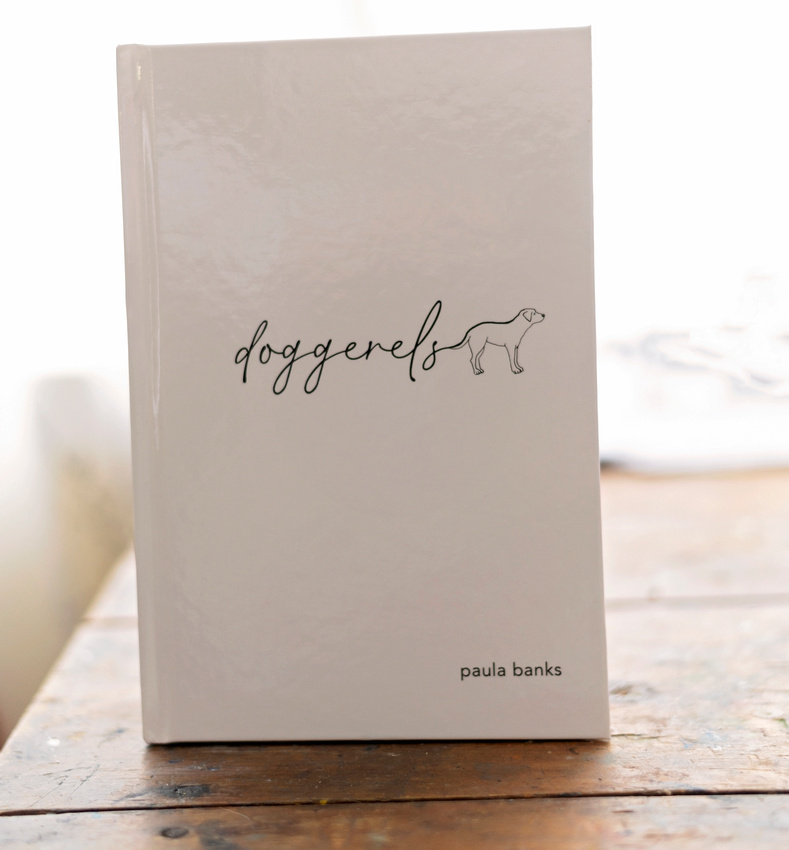 Today is the day that Doggerels goes out into the world. This book of poems about dogs is an accumulation of years of writing, and the subject matter goes back even further, encompassing the lives of many beloved dogs.

I have always loved writing; it has been a creative outlet for nearly half a century. As a little girl, I began reading very early, and writing not long after. Most of it was horse-oriented because I was horse-mad. I think I was in grade two or three when my first poem was published. I can still recite that little masterpiece:

Others work hard all day

Just to get their oats and hay

Although a horse is beautiful to see

That little pearl was included in the school board’s poetry collection for the year, and for eight-year-old me it was a Very Big Deal indeed.

I went to an elementary school that had a rather mixed profile of students...it was a very WASP demographic, but a vast mix of socioeconomic strata. I resided somewhere safely, anonymously in the middle. At least until grade four, the year when the powers that be chose a half dozen of us and, in September, I was told on the first day of school that I would not in fact be entering grade 4 with my classmates, but rather joining a mixed grade 4/5 class. In other words, skipping a grade. Not too traumatic on paper, but in reality what happened was that the ''browners'' were thrown in the lions' den of grade 5 reprobates and rebels who didn't match the grade profile any more than we did. We were ostracized and ridiculed and bullied and we wore that label right through grade 8, when my family moved.

On the plus side, our small group bonded in solidarity and weathered it together as friends. We joined a poetry club in grade 7, and there were four of us, five including the teacher. That endeavour drew perhaps the worst mockery and harassment of all. Poetry became for me a very introspective exercise, something that caused me shame.

It took me decades to come back to it, and when I did, I still found (and still find) myself squirming self-consciously about sharing it. Over the past decade I have been posting photos on a blogging site, and from time to time another blogger on that site published poems to accompany his photos. Moreover, he was a high school teacher and a basketball coach who used poetry with his students and athletes. His practices were a source of courage and inspiration for me to let my own poems fly free. Just recently he posted a picture of a discussion with a classroom literally crammed with students...a seminar about poetry. Amazingly, the students were there voluntarily and openly and enthusiastically. How I wished that I could have had that sort of experience.

Soleil’s passing in November 2020 was what sowed the determination in my mind to publish my poems about dogs. In the wake of her death, I was only able to express the rawness of loss through poetry. I decided that a book collecting all of my dog poems would be a tribute to her and to all that she meant to me. Writing it for her gave me the permission to publish, to share, to put it out there. Getting it prepared for publication was a useful distraction, keeping me on the straight and narrow amid all of the recent stress with Arwen’s two surgeries. In all honesty, I have no idea how this book will be received, but I also realize that its reception matters far less to me personally than does its creation.

My secret hope is that the people who do hold it in their hands and flip through the pages will relate to it and see their own dogs, past and present, in the words and illustrations. In the vast corpus of world literature, I can only find one single poet who has dedicated a volume entirely to dogs, and that poet is none other than the late, great Mary Oliver. She too has been an inspiration to me, and while I cannot pretend to emulate her, I certainly believe that she was on to a good thing.

Last but not least, Doggerels is both an end and a beginning. It is the product of a long creative process, but it is also the catalyst for a couple of new, related endeavours.

It has been a long and difficult couple of years for all of us, with a whole lot of negativity across every facet of our lives. My wish is that Doggerels be a springboard for goodness and positivity. To that end, I will be donating some of the proceeds of sales of the book to Elder Dog Canada, a Canadian charity that does wonderful work for elderly people and their pets.

Secondly, today also marks the launch of a new Instagram account, @doggerels_dogkus, where I will share a ‘dogku’ (a dog haiku) each day – a little daily morsel of poetry about dogs. I hope that you will enjoy them and relate to them.